http://www.independent.co.uk/news/obitu ... 723189.htm
It says here
Back in action, Holloway distinguished himself when on 16 April 1945, as flotilla commanding officer of the 28th in HM MTB 409, he attacked a convoy of German E-boats ("Enemy war motor boats") and barges, sinking one of them. He had to take special care since he had under his command two Royal Yugoslav Navy motor gunboats and was under orders not to let their crews be captured by their opponents, the partisans of Marshal Tito. The MTBs worked with both these factions, Tito's men often serving as ship's pilots. In the same week, on 11 April, Holloway had been one of the skippers, in three MTBs under Charles Jerram, who sank five heavily armoured Flak lighters (cargo and troop-carriers with anti-aircraft guns) with six torpedoes, each MTB having only two.
http://www.worldnavalships.com/forums/a ... 11814.html
http://www.komiza.com/book2/PARTTHREEFINAL.pdf
Here, too, is written about the success of the 28th MTB Flotilla in April 1945 with the sinking of a plurality of German F-lighters.
But all F-lighters sunk in 1945 in the Adriatic Sea are known and none of them was sunk in a naval battle. What if the boat sank 28th Flotilla?
Top

Link, in 1945 at the 28th MTB Flotilla Adriatic torpedoes sank many F-barge. These barges very little sediment, making them virtually invulnerable to torpedoes with a contact fuze. Torpedoes with which fuse used MTB 28th Flotilla?
Top

Three boats left Ancona to patrol off Carole Point to the north of Venice 410 (Woodhouse), with Jerram on board, 409 (Holloway) and 408 (Tonkin). It was a night of low cloud, slight showers, no moon, and visibility very bad, until it cleared slightly just before midnight to 2500 yds.

Reaching a position six miles off Carole Light at 22.01, the unit stopped and cut engines to wait. An hour later radar contact was made with an enemy convoy approaching from about 4 miles to the north east. The MTB's started up and headed in that direction at eight knots. Several minutes later the contact was lost, but by this time the enemy's course and speed had been plotted and Jerram was able to fix a point of interception. Speed was increased in order that the attack should not be prolonged, in view of the rapidly lifting visibility.

It was nearly midnight when seven long dark shapes were sighted, bunched together in two main groups, with a single ship well astern. Jerram gave the order 'Flag Four' over the R/T - attack with torpedoes. He himself swung round towards the second of the two groups and fired both torpedoes at two of the enemy craft which were moving very close together and which had been identified as F-Lighters. It was remarkable feat of aiming for both targets were hit and sunk. The other two MTB's (409 & 408) followed up the attack and three more F-Lighters in the first group blew up and sunk.

The remaining F-Lighter and the escort vessel fired back at the MTB's under star-shell illumination, but no damage or casualties were suffered. Having fired all torpedoes - with 5 hits out of six, certainly one of the highest percentages of success in any MTB attack - the unit headed back to Ancona.
Top

Good Evening An interesting blog re the 28th flotilla on looking at the names listed many of them come to mind . I was aboard MTB 243 of the old 24th Flotilla and some of the names mentioned immediately come to mind : H Du Bouley and Tim Collins were our Officers Claude Holloway MTB 242 , I have read the book of the 24th flotilla by H Cooper When I left MTB 243 I was drafted to MGB647
Good Night and Out
Peter
Top

Great photos, thanks for sharing. It seems the pic of the German E-boat bridge was also taken at Valletta.

Simon, although I'm not completely sure I think the E-Boat (Schnellboot) in this pic is S-61 : 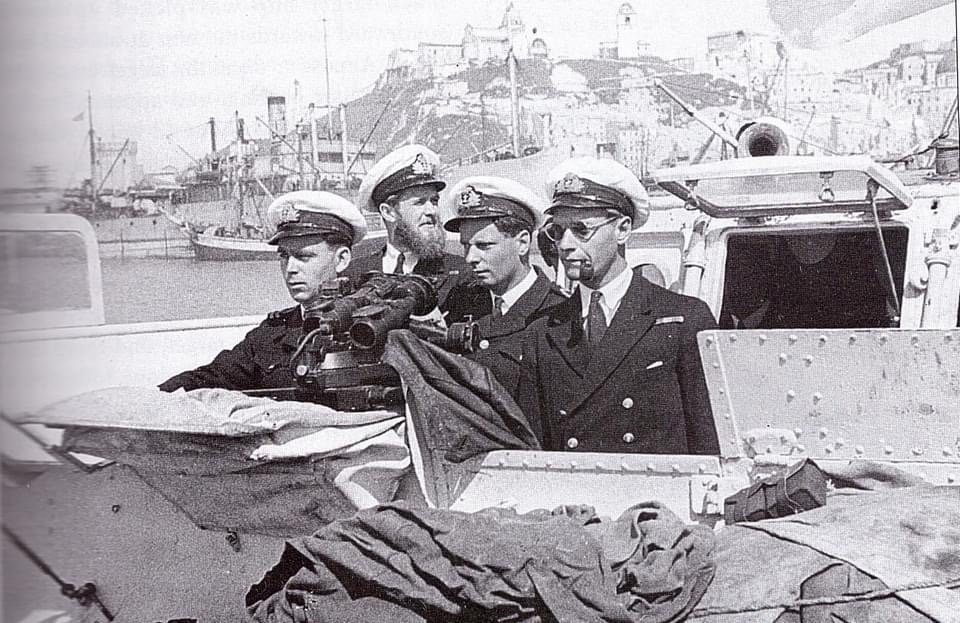 Captured Schnellboote at Valletta (scroll down almost to the bottom of the page) :

I cant find any specific information in my grandfathers book/notes.

That's an interesting photo book ! Perhaps you could make a scan of the E-Boat pics on page 20. I've seen the top left one before but I don't think I have ever seen the other two. These photos show S-151, S-152, S-155 or S-156. Here you can also find a photo of these particular vessels after having surrendered in Ancona :

I've found another image of the Schnellboot that I thought surrendered at Valletta (notice the torpedo targeting gear, someone seems to have removed the binoculars):

GERMAN SMALL SHIPS SURRENDER. MAY 1945, ANCONA, ITALY. VARIOUS SMALL SHIPS AND CRAFT WHICH HAD BEEN OPERATING IN THE ADRIATIC WERE BROUGHT IN TO THE ITALIAN PORT AFTER SURRENDER.. © IWM (A 28645) IWM Non Commercial License

Many thanks Simon ! The last three images you posted do indeed seem to show one of the type S-151 E-Boats. This series of boats was actually built at the Dutch Gusto Schiedam shipyard (in occupied Holland) according to German Kriegsmarine sepecifications :

Hi, while doing some research in to my Grandad's naval service I came across this forum and thought these photos I have would be of some interest. My Grandad (Harry Seal) was on MTB 405 which I just discovered, thanks to this forum, was part of the 28th Flotilla in Malta.
Kind Regards,
Matt

Thanks for posting some of your Grandad's story from MTB405. My Father was on MTB 406 and they served in the same flotilla. I am also researching my Dad's story, if I come across anything relating to 405 I will tag you. Regards Simon
Top

Thanks Matt for posting these interesting pics ! Interesting to see the band stand of the twin Oerlikon on MTB 405, this part of the boat is usually hidden from view in most pics. I also like the E-Boat pics.