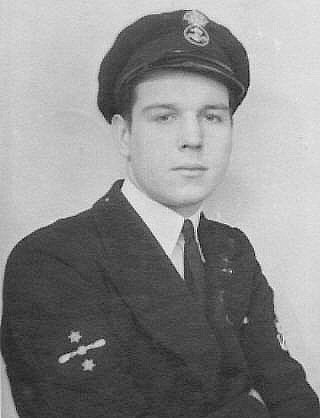 This quiet and gentle person was a loyal member (2911) of the Coastal Forces Veterans Association (London Branch) and will be sadly missed by all who knew him, and especially by his two children, Paul and Sandra. He had a very eventful life. His wartime, and particularly his later service in the Mediterranean, can only be briefly described here but certainly recognised as being quite exceptional.

He was born in Killamarsh, Derbyshire on 6th January, 1926. He joined the Royal Navy in 1943 and did his initial training at HMS Royal Arthur, Skegness (the old Butlin’s Holiday Camp) then, after finishing his initial training, went to RNB Portsmouth. He started active service as a Petty Officer on minesweepers in the Baltic and around Iceland. He served on board HMS Indomitable but later transferred to Coastal Forces and onto MLs in the Mediterranean.

He passed a selection board (Naval and Police) in May 1946 and was seconded for 6 months by the Royal Navy to the Libyan Police Force—Port and Marine Division—assisting with the setting up of a Lybian Naval Coastal Force, using craft from the RN.

He was demobbed in Malta, and then returned to Tripoli to take up a permanent position with the Marine Division of the Tripolitanian Police Force (assigned by the Foreign Office in London). He met his future wife Valerie Arnell who had been driving ambulances with the ATS in Libya and Egypt and they were married in Tripoli on 12th June 1948. Their two children, Sandra and Paul, were born in Tripoli and the family finally came home to England in 1957 (after Libya being given its independence as a British Protectorate).

In England, Howard worked for EMI Electronics—Weapons Division—until he retired. In latter years he became blind through macular degeneration and also deaf, however this didn't defeat him and he remained a very independent and self sufficient person to the end.

He will be remembered not only as a very brave and stoic gentleman, but also a kind, warm, and gentle person of the ‘Old School’. He will be greatly missed.