Greetings Shipmates,
Usually I take pleasure in first recording the business of our latest (17th July) Branch Meeting. But this time it's different. There wasn't one.

It was particularly disappointing - and embarrassing - because the meeting was to be followed, as widely advertised, by the annual Social organised by the Sea Cadets Parents Committee as an expression of gratitude for our efforts during WW2. In the event, I and my little party arrived (late due to road repairs around London Bridge) to find a forlorn little figure sunning itself on the forecastle and hiding behind huge sunglasses, which turned out to be our Vera, bless her.

In the Gunroom we found Steve standing by, with ladies of the Parents Committee complete with a huge supply of goodies temptingly laid out on three groaning tables. Our total complement consisted of two veterans, two other Branch members, and three Supporters. So,I cancelled the Branch Meeting and expressed my sincere apologies on behalf of our members to Steve and his ladies for the embarrassing turnout. Typically they made little of it and put us at our ease gratuitously.

One reason for some absences was that we had been invited to an upper Thames annual boat show which was to be held over the 15/17 July weekend and at least two members had given me prior notice of absence, as they intended to provide their own 'Coastal Forces' exhibition there. I trust we will have fulsome reports of the show which will be posted in our Newsletter and website.

I also heard eventually that Ted had attempted, but given up trying to get through the London traffic chaos, and had to return home.

On a happier note, I can report that the saga of delivering the Wallis Collection to Kevin's home was completed. Steve and two well-wishers who had turned up solely to collect the books (and help reduce the goodies overload) managed to manhandle them off the ship and load into a car for its journey direct to Warwickshire. A pity that they do not live within recruiting distance.

Finally we, joined by the ladies of the Parents Committee, did our best to level the huge supply of refreshments and we returned home full up, and not fed up.
Ken Gadsdon

This ceremony was held on Monday 20 June the beginning of Armed Forces Week, and CFVA was invited to attend by the new Mayor of London - Sadiq Khan. Bernie Coote and I attended. The weather was foul, but the band of the Coldstream Guards played gamely on. There were welcoming speeches by the Mayor and by a General (whose name I did not catch). Afterwards we were treated to refreshments in Civic Hall.

We met Commander John Herriman DL who is the Commanding Officer of the Royal Naval Reserve on HMS President (adjacent to St Katharine's Dock). He has invited the Branch to visit HMS President, and said that should we have problems on HMS Belfast, we would be welcome to have our meetings there. This would be very appropriate, since many Coastal Forces RNVR trained on the old ship before the war. We also met Rhiannon Watson, who is the Senior Community Liaison Officer for the greater London Authority. She organises various GLA events including the evening meeting for ex-servicemen with the previous Mayor that Peter Bickmore and I attended. She has promised to make sure that our Branch gets invitations to any similar events. Peter B and Vera hoped to attend this occasion, but were prevented by circumstances beyond their control (lack of a carer, pedestrian killed by train)

This is the bench which has been replaced with aid of a grant from CFVA. Withyham Church PCC wrote to say that the new bench has been installed and the plaque attached. We were invited to the ceremony of dedication on 3rd July, but regretfully were unable to do so. 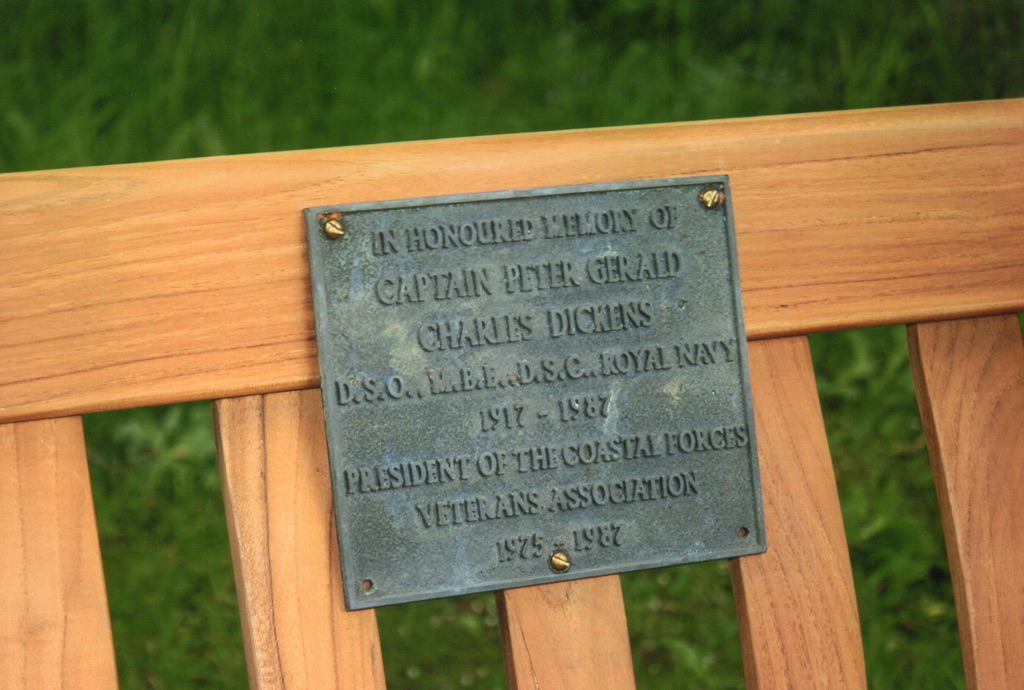 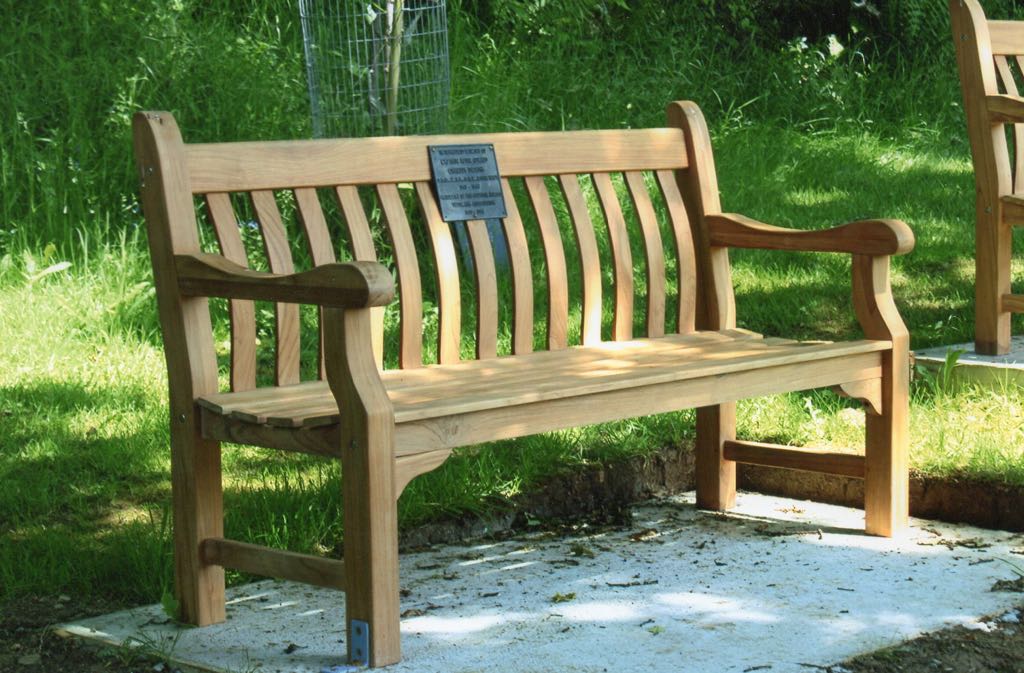 The London Branch were invited to attend this Festival at Henley over the weekend of 15–17 July. We were grouped with other services, our neighbours were the Rifles and Gurkhas. Kevin had created three very good posters explaining who we were and describing our boats. He joined me on Friday and helped set up the display.

Peter Bickmore and his family joined me on Saturday, and ended up taking the salute at a marchpast by the Band of the Rifles. On Sunday I was joined by an old CFVA member ñ Ken Cook, who had not realised London Branch was still operational. Two MTBs were on show, CMB 9 from the First World War, the only one left afloat, and MTB 102, the prototype made by Vosper. There was also RAF 1502—a seaplane tender.

Medusa has spent most of June visiting Dunkirk, along with MTB 102 and some of the 'Little Ships'. She has now returned to Gosport and a more routine life—apart from taking the Duke of Kent to the Isle of Wight!
David Carter

Due to unforeseen circumstances the report from the City of London Sea Cadet Unit will be held over to the Winter edition.

This years trip completed our 20th annual visit since 1996, when again we were received with a great welcome from our many friends and relationships we have established over many years.

We were delighted to give a warm welcome to Jane Murphy, niece of Sub Lieut John Murphy lost with other members of the crew with the sinking of MTB 655 in March 1945.

There was also a warm welcome to the family of the late (2007) RAF Pilot Derrick Jones who with Freddie, used the hastily constructed local air strip built in 1944 for the Hurricane Fighters of RAF’s No 6 Squadron.

Our Services at the five island memorials, being led by RAF Padre Sqdn Leader Ian Brown this year, became even more poignant and real with the warmth and spiritual comfort of the occasion. We thank our Embassy in Zagreb for the support and arrangements for this day of Remembrance and Reflection.

The meeting of people that have grown up over the years since we have been visiting the Island, seem to get younger each year - the hotel staff, the taxi driver, the Custom Officer!

Other days were pleasantly occupied visiting places and sites that have become part of memories past; the site of the British Military Medical outpost of 1944 where we dedicated a plaque and planted a rose bush in 1990, the site of the Atlantic Memorial that was the British cemetery in 1944/45 and finally Roki Wine Bar that overlooks the still visible airstrip where mine host is Valerie, our veterans sweetheart.
Peter Bickmore

Some of our Senior members may remember the former Newsletter produced at HMS Hornet during the late War years that used the above well known slang word as its introductory title.

A few copies survived and these were donated to the London Branch several years ago by a very enthusiastic historian who had been researching the town of Gosport Hants.

His research obviously included that of HMS Hornet, the famous CF base but also of HMS Siskin, a former RAF station that eventually became a Fleet Air Arm training establishment (and much later to be renamed as HMS Sultan). Here is an interesting extract from the February 1945 edition of Buzz remembering that this was just 3 months before the end of the war in Europe—and just days before the disaster that befell the Canadian 29th Flotilla (February 14th). The author was that famous character known as a 'Naval Correspondent' but what is surprising to me is that any detail would be allowed to be published before the end of hostilities.
Ted Else

Channel Victory - The Work Of The Little Ships

by a Naval Correspondent

In some of their most courageous exploits of the war, the Royal Navy`s "little ships", the M.T.B`s and M.G.B`s of Coastal Forces, played a major role in winning the Battle of the English Channel. This victory enabled invasion ships to pass freely to France to build up the Allied armies.

Some part of this story can now be told as the French and Belgium Channel ports have been liberated. There were two phases to the struggle; the first was defensive, the second offensive. The defensive phase lasted until about D-Day + 10, by which time the British naval forces had mastered the enemy. From that time the Navy`s destroyers, frigates and Coastal Forces carried the war to the enemy`s doorstep, blockading him and finally destroying his forces.

For weeks after D-Day fighting off the enemy coast was severe. From June 5 until August 30 the Navy fought 95 actions, of which 84 were fought by Coastal Forces. During fourteen days in August the "little ships" did 143 sorties and steamed 28,600 miles.

One must take part in such nightly patrols to know the strain on officers and men. At the best of times Coastal Forces boats are not comfortable, but during the Battle of the Channel the weather was bad. Night after night crews had to endure buffeting, seas over the docks, and sopping clothes, while they searched the darkness for enemy. Mostly they operated in waters heavily mined by the enemy, and were often under heavy shelling from German shore batteries.

There was high speed fighting against E-boats, R-boats and German convoys. Sometimes several bitter fights would take place in a night. On one night there were eight encounters.

The Germans had many flotillas of R-boats and E-boats operating from the Channel ports and it was essential that these should be prevented from attacking conveys of invasion ships plying to France.

The Coastal Forces developed an effective technique: they drove the enemy boats into the Navy`s destroyer and frigate patrols. The big ships in turn drove the enemy back to the waiting M.T.Bs and M.G.Bs.

"This defensive fighting went on for ten days," explained a Staff Officer at the naval headquarters where the operation was planned and controlled. "When the enemy discovered our `shuttle service` manouvre they decided discretion was the better part of valour and retired. After that our ships took the offensive and began blockading Cherbourg. By June 26 when the port fell, three E-boats had been sunk for certain and a large number damaged. A few escaped West and the rest went to Le Havre."

The Germans tried to send escape convoys down Channel from Cherbourg, and the Coastal Forces craft attacked these. One convoy was attacked on the night of June 24 four times within two hours by different patrols of our "little ships". Four enemy ships were sunk by torpedoes and the remaining one by gunfire. That convoy was annihilated.

When British destroyers severally defeated an enemy destroyer force in the Bay of Biscay shortly afterwards, the threat from the west to the invasion convoys was virtually removed and the Coastal Forces craft moved to blockade Le Havre. Every night for two months the craft kept watch off the entrance to Le Havre, frequently under fire from shore batteries.

Coastal Force craft are credited with 38 enemy ships sunk for certain during the Battle of the Channel. Victims included coasters, E-boats, R-boats and tank landing craft.

A Police Stop at 2am

An elderly man is stopped by the police around 2 a.m. and is asked where he is going at this time of night. The man replies, "I am on my way to a lecture about alcohol abuse and the effects it has on the human body, as well as smoking and staying out late."

The Officer then asks, "Really? Who is giving that lecture at this time of night?" The man replies, "That would be my wife."

The Committee has agreed that future Autumn Branch Meetings on HMS Belfast will now be held in October. This is to even the gap between meetings and to overcome the anomaly that we previously had having two meetings in November (Remembrance Sunday and the November Branch meeting). Consequently, our next meeting will be on Sunday 16 October 2016.

The autumn newsletter is available to download and read in full as a pdf.