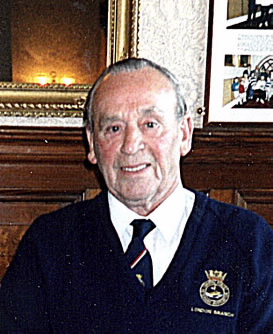 Andrew Banger was born in Stirling, Scotland. He had three brothers and one sister. His mother worked in catering and his father was a chauffer.

Andrew moved to England with his family at six years old and started his education. On leaving school he became an apprentice plumber, and on completing his apprenticeship Andrew volunteered to join the Royal Navy. He was based at Felixstowe and served on MTBs (MTB 454).

During his service Andrew was awarded the Distinguished Service Medal and was also Mentioned in Dispatches. Andrew was demobbed in 1946, and moved with his wife Joyce to Slough in Berkshire. He worked as an engineer at various establishments. During his career Andrew worked at Pinewood Studios building the sets for various films including James Bond and Super Man.

After retirement Andrew maintained an active life. He loved holidaying in Scotland, and a proud achievment of his was the building of a replica model of his boat MTB 454; this was scratch built from drawings and historical photos. He installed engines and equipment to make it radio controlled, and the model spending spent many hours on the water.

Andrew was a very proud member of the Coastal Forces Veterans Association and he enjoyed attending meeting and AGMs.