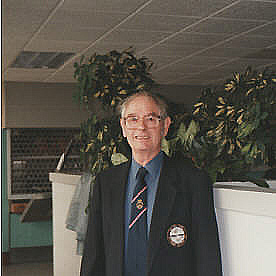 It is with a great sadness that we record the death of Donald Campbell.

Donald was one of the early joiners of the CFVA, having come aboard in February 1982, and carried the membership (CFVA) number 869. He was a popular member of the London Branch becoming Secretary of the Branch from January 1989–December 1994.

His wartime service in the Mediterranean was as an A/B on MTBs 388 & 5009 and also with a Coastal Forces mobile base in Italy including Sardinia and Maddalena.

In peacetime Donald became a very keen supporter of West Ham United so we could always expect a good repartee at the London meetings with the Spurs and Orient supporters.

Donald retired from the Ford Motor Company at Dagenham having been employed as a maintenance electrician. Sadly Donald was to spend his last years in a nursing home suffering from a cruel and debilitating illness.

To his wife Iris we send our deepest sympathy and our love at this very sad time.