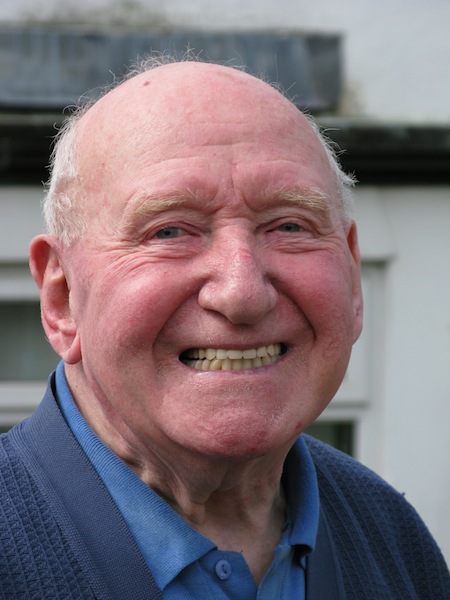 Douglas Biddiscombe died in the Cholwell House nursing home, Temple Cloud near Bath on the 6 April 2014. He was 92. Douglas had served as a motor mechanic in HM Coastal Forces from 1940 until his decommission as a Petty Officer in 1946.

Douglas married Dorothy Field in Plymouth in April 1943 and they remained together until Dorothy’s sudden death in 2003, not long after the celebration of their 60th wedding anniversary. They had two children, Richard and Pamela.

Douglas spent much time recounting his time in the navy. He told of the things he’d experienced but played down his role in the action that led to his DSM. He was particularly interesting when talking about war-time social life. Dancing was important to him and Dorothy when they were courting. He told of a night in which they exited the dance hall in Fore Street Plymouth to find the street ablaze after a raid. He’d also proudly recall the various rouses he’d used to avoid paying the rail fare from Isleworth, where he was training, to Plymouth in order to see his future wife.

The DSM was awarded following enemy action in the English Channel in 1943. His boat was damaged in the incident and the engine room filled with fumes. Whilst others in the engine room were overcome and unable to respond to the emergency, Douglas brought the boat safely home to Lowestoft.

Douglas was notified in early 1945 that the medal was to be presented to him by the king and he was invited to Buckingham Palace for the investiture. Alas, he was suddenly drafted to India and therefore unable to go to London. His family received the medal in the post.

This tour took place between October 1945 and March 1946 and was the second of his overseas postings. The first began in July 1943 when he spent over a year away from Britain serving on MTBs in India and Ceylon (now Sri Lanka).

Douglas was a self-effacing man who, like so many others at the time, went back to the job he’d left before the war and continued a life that could never recapture the excitement, danger and comradeship of those terrible years. Whilst on the surface he seemed to be an ordinary family man, he had depths of insight, courage and sagacity. He also had a real integrity that shunned anything false, superficial or cruel. His sense of humour made him a popular figure in any company.

Apart from the war and his last three years in the Somerset nursing home, Douglas lived all his life in the house in which he had been born. It was here in Newport that he worked for the local council for 30 years before working as a warehouseman and commercial traveller for a wholesale business run by an old rugby friend.

Indeed, as one may guess of a man from south Wales, one of his real passions was rugby. Another was big bands; he was especially fond of the Ted Heath orchestra. One of their best-known recordings was played at his cremation and that memory, along with the abiding love and respect he instilled in those whose lives he touched, will outlive him for many years to come.