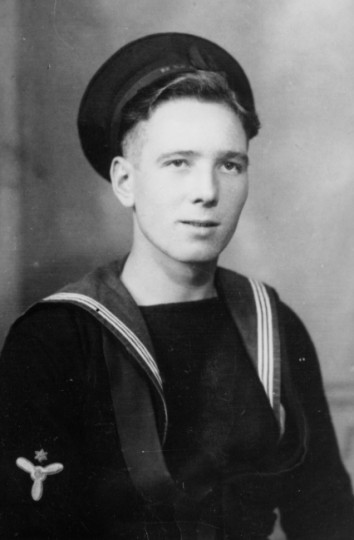 It was with great sadness that the news of ‘passing into calmer waters’ by George was received by the London Branch (of the former CFVA). Although unable to attend recent meetings he remained a loyal member (1212) and will be sadly missed.

The eventful life of George Heard began on the 14th March 1925 in Bermondsey, South London. Leaving school aged just fourteen, he began his early working life with several employment positions, including one working as a Page Boy for the Daily Mirror in Fleet Street, London.

The beginning of the Second World War found George working for a construction company driving dump trucks and bulldozers building the military camps that were required for the War effort. On reaching the age of eighteen he volunteered for the Royal Navy and was called to ‘muster’ on 17th June 1943.

Allocated to the Port Division of Chatham and given the service number of C/KX 528532, he was placed in the Engineering Branch, becoming enrolled as Stoker 2nd Class.

His records show that he served on MGB 16 between 13th and 26th September 1943, joining MTB 723 on 2nd June 1944 and becoming Stoker Mechanic 1st class (17th June 1944). This vessel is recorded in several publications as being heavily involved in actions during the time that George was aboard.

Returning to civilian life he found employment as a gas fitter for the South Eastern Gas Board at their Phoenix Wharf works at Greenwich, London. He continued to work for the SEGB (later British Gas), retiring after forty-one years of continued and loyal employment in 1989.

He had met his wife Doris Church during the War, through an introduction by his uncle who worked with Doris in the Woolwich Arsenal. They were married on the 26th December 1948.

George will be sadly missed by all those who knew him, especially Doris and their three children—Trevor, Kieron and Ramon. This gentle gentleman will be remembered also as having served his country well through the darkest of hours.