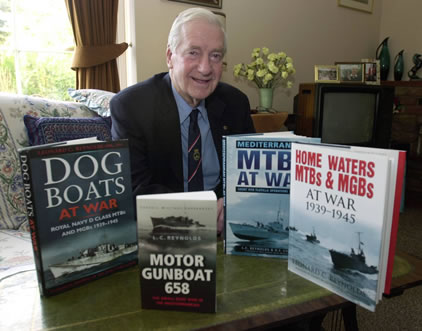 Leonard C Reynolds OBE DSC, affectionately known within Coastal Forces circles as ‘Rover’ Reynolds, has died aged 89. His nickname, acquired during his service in Coastal Forces, was a reference to his lifelong interest in the scouting movement—Rover being the most senior section of the British Scouts, whose motto, rather appropriately in Len’s case, is simply “Service”.

Len was raised in Wallington, Surrey, as the son of a police inspector, where he first joined the scouting movement. In the spring of 1943, as a nineteen year old RNVR midshipman fresh out of training, Len found himself posted to MGB 658, a Fairmile ‘D’ motor gun boat, or Dog Boat as they came to be known. This posting, as it happened, was to prove one unbroken tenure with the boat, lasting from its commissioning at Brixham in March 1943, through to its paying off at Malta in August 1945, serving first as Midshipman and Navigation Officer, then First Lieutenant and Gunnery Officer, and finally as its Commanding Officer.

Len was to serve his apprenticeship under their joint tutelage; their encouragement and advice always to hand, along with their leadership qualities, which were to prove an inspiration to him, both during the war and in later life. Known collectively as the ‘Three Musketeers’ , they developed as Len put it, “an uncanny, instinctive communication in action”, which was to provide him with a grounding like no other, in the art of commanding a Dog Boat at war.

Not long after arriving in the Mediterranean, the crew of 658 were to be involved in their first major action of the war during Operation Husky — the invasion of Sicily in July 1943. Later that same year, they were to single-handedly sink two enemy vessels in one night-time attack, while on passage from Maddalena, to a forward base at Bastia, Corsica. In early 1944, 658 along with the other boats in the flotilla were subsumed into the newly formed 56th MGB/MTB Flotilla under the overall command of Lieutenant Commander Maitland. The new flotilla went into action almost immediately in support of the Anzio Landings, being tasked with mounting a diversionary attack to the north of the Anzio beachhead at Civitavecchia. They happened instead upon a German coastal convoy, comprising an F-Lighter carrying ammunition, escorted by two E-boats, all of which were pounced upon by the flotilla in a surprise attack, destroying the ammunition vessel and one of her escorts. Len was to to be involved in many similar actions, on leaving Bastia for the forward bases of the Adriatic, where he and 658 were to see out the rest of the war.

In late July 1944, when he had only just turned twenty-one, Len took command of 658 temporarily, when Lieutenant ‘Corny’ Burke was briefly hospitalised on the insistence of a medical officer, and no other senior officer was available at short notice to relieve him. In August 1944, Maitland, Ladner, and Burke, who by this time had resumed command of 658, fought their last engagement as a group, in an action known as the Battle of the Mljet Channel, which lasted over five hours, and destroyed the greater part of a large coastal convoy. Shortly after this, both Tommy Ladner, and Douglas Maitland left to take up senior positions at Coastal Forces headquarters, leaving Liuetenant Burke to be promoted Senior Officer of the flotilla, and Len to be appointed in his place, as Commanding Officer of 658—a position he was to hold until the end of the war, and the decommissioning of the boat at Malta. Len was awarded the DSC in December 1945 for distinguished service during the war in Europe.

After the war, Len embarked on a career as a teacher, teaching in two grammar schools, before becoming headteacher of Kendal Grammar School in 1960. During this period he also took his first foray into publishing, writing an account of his time in Coastal Forces in the Mediterranean, simply entitled Gunboat 658, which was published in 1955. His first title, along with Peter Scott’s Battle of the Narrow Seas (1945), and Dudley Pope’s Flag 4 (1954) were to remain standard works of Coastal Forces history over the following decades.

In 1965 he was appointed headmaster of Maidenhead Grammar, overseeing its transformation in 1973 to the comprehensive Desborough School — now Desborough College. Over the next thirty years he was to fulfil many civic duties, including those of magistrate and chairman of the Maidenhead bench, Deputy Lord Lieutenant for Berkshire, and trustee and president of the Maidenhead Arts Council, while his lifelong involvement with the scouting movement brought the award of OBE in the 1981 New Year’s Honours List, for his activities as Chairman of the National Activities Board of the Scout Association.

The origins of his later publications lay in a request made to Len in 1986 by Dr Christopher Dowling of the Imperial War Museum (IWM), who had asked him to compile dossiers on every MTB, MGB and flotilla, and write a definitive history of Light Coastal Forces. A research grant from the National Maritime Museum enabled him to proceed with the first stage of this ambitious project, by carrying out research at the Naval Historical Branch, and later, the Public Record Office at Kew, and the Royal Naval Museum at Portsmouth.

On finding the official records for Coastal Forces to be somewhat incomplete—particularly for dates prior to 1943—he set about the task of acquiring material from the veterans themselves, concerned that much of the information and records held by the officers and crews of boats, and not available elsewhere, would be lost over time, unless a serious effort was made to record it. To that end, he enlisted the help of the MTB/MGB Officers’ Association, as well as fellow members of the Coastal Forces Veterans Association (CFVA), via their quarterly newsletter.

His first request for information was made in the Autumn 1987 edition of the CFVA newsletter, in which he modestly announced a Research Project — Coastal Forces in 1939–1945, requesting members’ assistance in filling out a questionnaire, which had sections covering bases, area and type of operations, actions, flotillas, officers, crew lists, and asking for all supporting information, including dates. Hundreds responded to that initial request, sending in completed questionnaires and photos, which helped breath life into the otherwise cold and impersonal facts provided by the official accounts.

With a mass of material now at his disposal, Len started on the next stage of the project; that of organising all the available information into a format fit for publishing. Seeing that there was too much material to distil into a single publication, he arrived at the decision to split the work into three separate volumes, starting with the Fairmile ‘D’ Dog Boats—the subject with the most complete records then available, and the one he was most familiar with from personal experience. The book detailed the history of all the ‘long’ boat types in their various theatres of operation—Home Waters, the Mediterranean, and Norway—and he was ably assisted in this, as he was in all three volumes, by his wife Win, who acted as his secretary and typist, and by the official historian of the CFVA, Geoffrey Hudson, who meticulously checked the manuscripts for errors and omissions. When Dog Boats at War was published in 1998, a full eleven years after first commencing his research, it became an instant classic.

With the first volume delivered, Len turned his attention to the second in the planned trilogy, this time on the subject of the ‘short’ MTBs in the Mediterranean. This volume was co-written with H. F. Cooper, himself a veteran of the campaign as a young Sub-Lieutenant on MTBs, who had already carried out his own research on the subject, compiling written histories on each of the flotillas involved. Len continued to make fresh appeals for information, in an effort to reach those veterans who had joined the CFVA since the earlier requests, which resulted in further archive material being brought to light. Mediterranean MTBs at War was published in 1999, and the final volume, Home Waters MTBs and MGBs, which had required the longest period of preparation, on account of the greater concentration of manpower, boats and actions there, was officially launched at a reception held at the IWM, in September 2000.

All in all, the creation of these three volumes had taken over thirteen years to complete, during which time a considerable archive of written and photographic material, documenting the role Coastal Forces played during the Second World War, had been saved from obscurity, and handed to the IWM for preservation and safe keeping.